The Austrian Glock 17 is currently one of the most popular and recognizable self-loading pistols, which is in high demand both by police and armed forces around the world, as well as by ordinary citizens who buy weapons for sports shooting and self-defense. 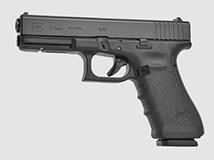 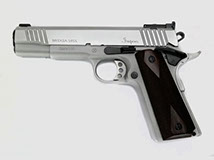 Italy's 1911 Brixia semi-automatic pistol, offers a short and clear trigger and a fully adjustable scope. Finishing option - chrome. The gun is assembled entirely from Italian-made materials and components, with tight tolerances to ensure performance and accuracy. 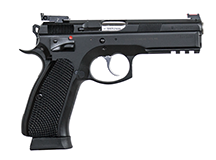 The CZ 75 is a semi-automatic pistol made by Czech firearm manufacturer ČZUB. First introduced in 1975, it is one of the original "wonder nines" featuring a staggered-column magazine, all-steel construction, and a hammer forged barrel. It is widely distributed throughout the world and is the most common handgun in the Czech Republic.

The Sig Sauer Mosquito gun is supplied with a wear resistant, polymeric frame. The breechblock is equipped with a regulated sight, located on the breechblock frame made of shock-resistant polymer. The hilt of the gun is supplied with the improved ergonomic holder. Mosquito is characterized by high precision of the hitting traditional for the guns issued by the SIG SAUER Company. 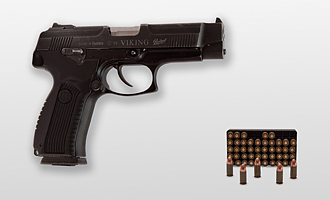 Weight with magazine without magazine: 0,95 kg

The MP-446 gun C «VIKING» is the sport- training firearm oriented for firing to the target at distances to 50 m. Firing practice from the gun make by magazines of 9 mm of Luger (9 mm of Parabellum 9х19). 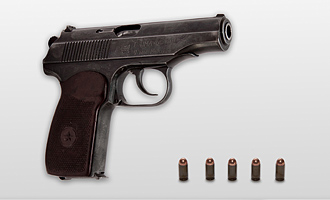 The 9-mm gun of Makarov – the autoloading gun developed by the Soviet mechanician N. F. Makarov in 1948. It was added to arsenal in 1951.  It is an individual firearm in the Soviet and Post-Soviet armed forces and law enforcement agencies. 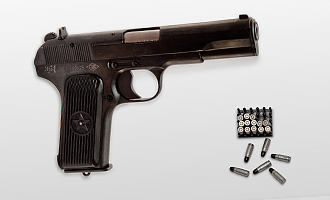 The mass of the gun without magazines: 0,825 kg

At the beginning of 1934 the gun under the name of 7,62 mm a sample of 1933  designed and modernized by F. V. Tokarev, was added to arsenal. Other name of the gun TT (Tul'skii Tokareva). In the period of the Great Patriotic War,  this gun was an individual firearm of officers in the Soviet army. 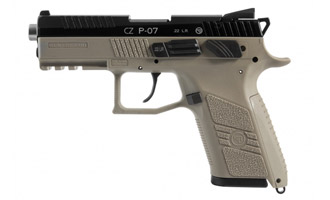 The CZ P-07 KADET is an adapter for the CZ P-07. In the slide of the adapter is a 95 mm cold hammer forged rimfire barrel chambered for .22 LR cartridges with a 16-inch right hand lead. The trigger mechanism allows the user to change between decocker and a manual safety. Depending on the version, one or both controls can be included. 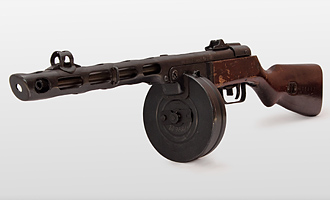 Weight with magazine without magazine: 4,75 kg

Magazine Capacity: 35-round box magazine or 71-round drum magazine

The submachine gun created in 1940 by G. S. Shpagin was the most mass sample of automatic firearm of the Soviet infantry during the period of the Great Patriotic War. From this outstanding firearm to fascists was made a huge loss. 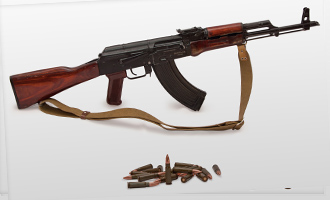 Weight (without riflescope, magazine, accessories, a cover with a belt): 3,8 kg

Accuracy: no more than 75 mm

The assault rifle АК widely known in the world and created in 1946-1947 by the mechanician M.T.Kalashnikov so far is an outstanding sample of firearm of this type. AK has been designed for magazines by  N. M. Yelizarov and B. V. Syomin's of a sample of 1943,and its destructive power remained at a distance to 1500 m.

Weight (without riflescope, magazine, accessories, a cover with a belt): 3,2 kg

Taurus CT9 G2 – the second modification of a civil submachine gun from the well-known Brazilian company TAURUS. Long time firm was made only by guns and revolvers. However took the order from Federal Police of Brazil for development of a submachine gun for security forces. The attempt turned out so successful that was born also the civil version of weapon stated as a fowling piece. 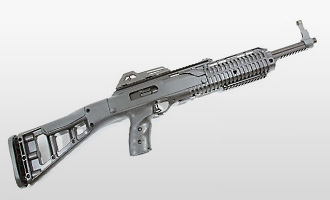 The Hi-Point 9x19 self-loading carbine is one of the cheapest in its class. In the basic version, the Hi-Point carbine differs in a very non-customary appearance, but it is fully capable of providing decent reliability and quite successful work at home, as well as for entertaining or training shooting. The effective firing range for carbines Hi-Point carbine model is about 100 meters. 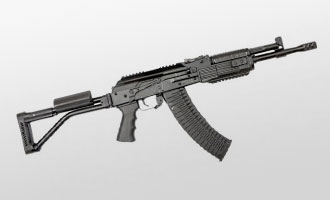 VPO-148-05 made under the cartridge 5.45x39 mm. It is compact, has a folding telescoping buttstock has a low return. Forearm, store, handle, the butt made of plastic. Differences VPO-148-05 from the base sample: Improved store latch allows you to press the reset key store without taking your hands off the fire control handle. Folding butt telescopic mechanism optimally adjust the length of a hand. Superior trigger HPE-148-05 provides a smoother operation trigger. Butt, folding to the right side, allows you not to dismantle the optics for transport. The fore-end is equipped with a Picatinny rail, which allows to mount additional accessories. 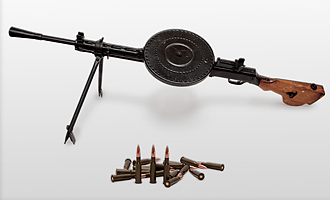 Weight with magazine without magazines: 9,2 kg.

Accuracy fire of three bullets from four at a distance of 100 m: 150 mm

In hands of the Soviet soldiers Degtyarev's machine gun was terrible weapon in fights with the Japanese militarists at the lake Hassan (1938) and the river Halkhin-Gol (1939), in war with belofinna (1938-1940), in battles of the Great Patriotic War (1941-1945) 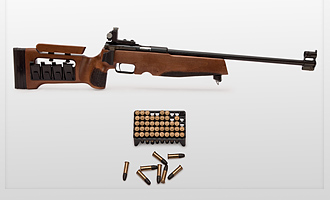 Sports 5-shooter rifles of caliber 5,6 mm are intended for firing in biathlon competitions at a distance of 50 m. Magazines of ring ignition with the maximum operational pressure of powder gases no more than 180 MPas are applied to firing (1836 kgfs / кВ.см). Are produced by JSC Izhmash in lots since 1991. Rifle BI 7-3 is recommended to women and juniors. 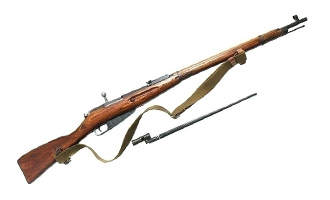 Mosin's rifle, known as well-known «Three-liner», was the main firearm of revolution of 1917, and also  of the Great Patriotic War. Mosin's rifle of a sample of 1891 is considered of the most famous samples of the Russian weapon. The imperial three-liner was involved in Russian-Japanese, and then and in World War I.

Distance vision (with scope): over 1500 meters

The SVT-38 saw its combat debut in the 1939–1940 Winter War with Finland. The SVT-40 was a more refined, lighter design incorporating a modified, folding, magazine release. The handguard was now of one-piece construction and the cleaning rod housed under the barrel. Other changes were made in an effort to simplify manufacture. Production of this improved rifle began in July 1940 at Tula, and later at factories in Izhevsk and Podolsk. Production of the Mosin–Nagant M1891/30 bolt-action rifle continued, remaining the standard-issue rifle to Red Army troops, with the SVT-40 more often issued to non-commissioned officers and elite units like the Naval Infantry. 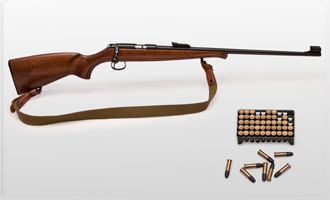 The small-caliber rifle CZ 455 is the multicharged rifle with the closed system of a lock (classical longitudinally sliding) intended for hunting and sports firing with a possibility of regulation of effort of sear. 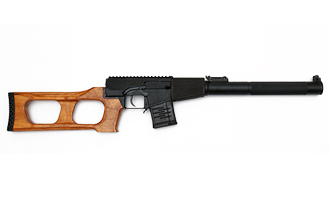 VSS - self-loading hunting carbine, which is a civilian version of the unique domestic VSS sniper rifle. VSS is a lightweight, balanced, compact carabiner, easy to carry.

When visiting a shooting gallery, we recommend that you arrive 15 - 20 minutes before the start of training for the necessary documents. Billing begins when your recording session, except in cases of delay on the part of our Club. A visit to the shooting range is done by appointment. In the case of the end of the rental paid time direction (the gallery) and the work of the instructor, the shooter must pay the additional time to complete shooting. The amount of extra time is agreed with the shooting range administration.